The Creativity of Ditko by IDW & Yoe!Books….a look inside!

Posted on August 6, 2012 by DitkoCultist

It has largely been considered to be one the most anticipated books of the year for Steve Ditko fans and enthusiasts around the world and a little over a week ago I received a sample copy from IDW’s headquarters in San Diego, California to view and review for DitkoCultist.

As you would expect for a book being charged at $39.99 (retail) the book contains a lot of content: much of it unique (photos, essays); much of it not (public domain stories). It also is made with high quality paper that is large and perfect for viewing or even displaying. Many of the vast stories being scanned are from past, often well aged, comics that shows a slight lack in colour and often a missing letter from the word balloons (a common occurrence because of Charlton comics poor presses). However this is a small distraction as the book meets up to many of its expectations. It provides many interesting essays, unseen photos, and a vast array of work stretching from the 50s to the 70s; not to mention lots of original art in-between!

With this hardcover being printed and produced largely by publisher IDW it was largely suspected that it would contain much public-domain work from Charlton Comics that has been printed many times by publishers Fantagraphics and Pure Imagination. This was largely correct, however what has been neglected up until now has been Steve Ditko’s work from the late sixties up until the mid-seventies which Craig Yoe and IDW have included in this publication. All, except for the last few are sorted in order (year) which provides scope to analyse the development of the artist’s work and his career. These stories are accompanied by original art and essays throughout which add an extra dimension when reading the Charlton work of Steve Ditko.

One thing that drew me to this publication was its promise of essays and unseen photos. Paul Levitz, who provides the introduction to the book, was a collaborator with Steve Ditko and writes a short but useful view into the artist’s character and writes with much fluency and admiration. This is quickly followed up by Craig Yoe’s introduction which reveals many aspects of each essayist and the context of their contribution. It must be noted however that like Yoe himself admits the end of his piece is fun pages of “speculation” – so provides little use for some solid facts.

The essays which really stood out followed from the first two starting with Mike Gold’s “The Ditko Bug” for its insider knowledge and personal recollection. Things that grab your attention are his comments on Ditko’s humour and the retelling of the first time they met at the DC comics offices. One resolved question which was shot at the elusive artist was: “Why do you draw hands like that?” The answer to which is simple but fascinating. The most striking and certainly most hard-hitting (and of course anticipated) of the essays comes from Amber Stanton whose father pencilled much erotic work that Ditko is thought to have inked. What is great about this piece is that it touches the emotional boundaries between the two artists and shows how close they were during the working time – the photographs reveal just as much as the essay. Amber herself recollects how she first heard of Ditko and Stanton’s friendship and reflects on a phone call between her and Ditko a year after her father’s death. It’s a harsh and troubling recollection but worth reading.

The essay to be written is from Jack. C. Harris who as recently as of 2011 had one of his Ditko collaborations published as it was taken out of the “Marvel vault” after sitting dormant for 30 years. He reveals to us that Ditko and himself still have features that are still to see the light of day (Dr. Ato & and The Street People for example) and are just waiting to be published! With tales of editing Ditko’s work at DC and visiting his home studio just “a few block of Times Square” Harris helps us delve into the deeper depths of Ditko. The last of the essays is special as it features an essay by Mykal Banta, who unlike the others has not met Ditko or even heard his voice. What Banta’s essay provides is a bit of clarity to the publishing practices of Charlton Comics; the low-end, low-paying but gold publisher who supported Ditko up until its collapse. With an added personal touch this essay is great for some background knowledge to company that was behind ALL of the stories in this book.

IDW’s The Creativity of Ditko is a fantastic way for new readers to get submerged into the world of Steve Ditko in great detail. It offers some of Ditko’s most interesting and substantial work put to paper (most of which is from Charlton) and puts them into context with an offering of original art and photos and informative essays which can even quench the thirst of most DitkoCultists. All though this book is expensive the publishers have put every effort into getting some new material out on our favourite illustrator: Steve Ditko. 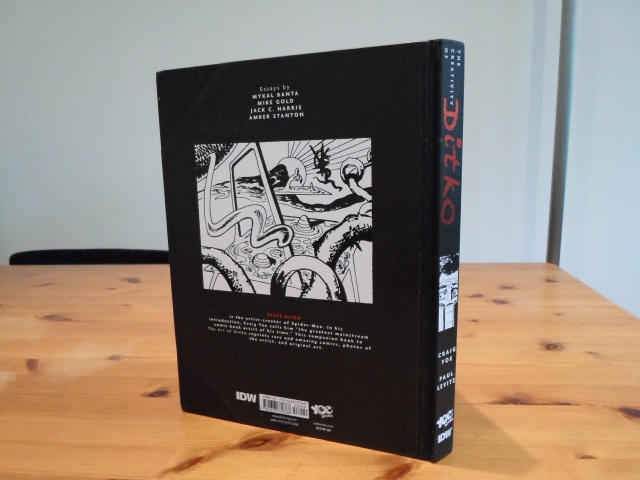